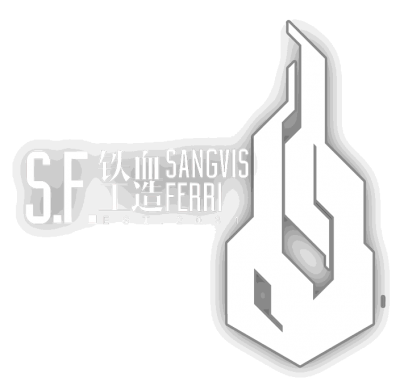 Sangvis Ferri Industrial Manufacturing Company (铁血工业制造公司), usually called Sangvis or SF, was a Romanian[1] arms manufacturer created in 2031, later turned terrorist organization,[2] and was the former first antagonistic faction of Girls' Frontline. It was a major Tactical Doll manufacturer and researcher under the lead of AI scientist Lycoris before the 2061 Butterfly Incident, when Sangvis Ferri's headquarters were destroyed and their main AI Elisa took control of their T-Dolls and turned against mankind. From then on, Sangvis Ferri was no more the name of a renown military manufacturer, but of a threat to humanity the PMC Griffin & Kryuger was tasked with destroying. Sangvis Ferri were later recruited as allies through Protocol Assimilation.

Unlike other T-Dolls, Sangvis Dolls are subordinates to the mainframe Elisa and do not require direct human orders to act.[3] Furthermore, they follow a command structure where the mainframe directly control defense-type and command-type "Ringleader" (or High-End Model (ハイエンドモデル) in Japanese) Dolls, who can then further delegate tasks to lower-ranking Ringleaders. Regular Dolls and other combat units are subordinates to Ringleaders.[4] Sangvis T-Dolls implement other experimental AI features, such as prioritizing the survival of comrades over other orders to facilitate collective survival (Executioner and Hunter),[5] prioritizing one's own survival over their allegiance to Sangvis Ferri (Architect)[6] or a purposefully unstable neural cloud (Dreamer).[7]

Established as a military hardware company,[2] Sangvis Ferri entered the market with low-end hand-to-hand weapons, but soon expanded at suspicious rates after signing a joint development contract with a mysterious company,[8] adding to its catalogue automated mortars, drones and alarm systems,[9] and eventually becoming one of the early partners of IOP through its Ukrainian branch. At the time, SF was rapidly growing and developed an interest in the resilient ALR-52P Dolls rather than the advanced technologies of the CSD-03H, and invested large amounts of money in IOP while also offering to provide AI researchers. Despite his surprise of seeing Sangvis's interest in older models, the president of IOP Havier Witkin gladly accepted the partnership.[10]

In 2040, amidst the rising international tensions of the Second Algerian War, Sangvis Ferri unveiled its Rippers combat Dolls model, built on the ALR-52P frame. Designed with military specs, it boasted a bulletproof casing, multifunctional helmet and could accommodate one weapon. However, the Rippers were slow and clumsy, making a poor display during the 2042 Ukrainian Civil War when the 20 first-generation units were quickly reduced to scraps by the trained militias. A second, better armored generation was deployed, but they were still too slow and allowed human enemies to take aim at their weak points.[1]

As World War Three began in March 2045, Sangvis Ferri fell under the control of the Neo-Soviet Union's Ministry of Defense along with IOP. The ministry didn't trust combat dolls technology and both companies were only ordered transport dolls to serve on supply lines for the first two years of the war. By May 2047, manpower shortage on the frontlines convinced the ministry to order combat dolls for field testing. While IOP doubled down on the all-purpose CSD series, Sangvis Ferri used the Ripper as the base for the specialized Jaeger and Vespid models. When the United States launched an armored assault campaign in Germany, the ministry had no choice but bolster their defense lines with barely tested combat dolls. Dolls AI at the time lacked the necessary adaptability to survive autonomously on a battlefield and the SF model lacked agility, so few of the 8000 units survived the campaign, but they nevertheless crushed the armored assault with startling efficiency, convincing the ministry to invest into combat dolls. Three years later in 2050, SF and IOP models displayed vastly improved performances during Operation Tradewind, fighting alongside multi-legged assault platforms and swiftly breaking mountain defenses in Southern Italy and pressuring Rome to surrender.[1]

Relations between SF and IOP fell through as national armies lost interest in IOP products to favor SF. Wiktin was enraged when IOP lost contracts to his own subcontractor, who used the technical documents IOP had provided, but nevertheless pushed for improving his all-purpose Tactical Dolls design. IOP would rebound later in the war when hiring former 90WISH members, and their ACD series were the most used during World War Three, with 11 730 units produced, including 2300 from Sangvis Ferri's factories.[10] The war was overall profitable to SF due to the satisfaction of their clients.[2]

The rivalry between SF and IOP would continue after the war when AI scientist Lycoris approached SF during business conferences to leave IOP, who refused to fund his research on autonomous AI. SF gladly accepted and hired Griffin and Kryuger PMC to escort Lycoris to their underground research labs and protect him from any retaliation by Wiktin. G&K accepted in exchange of complete access to Lycoris' future research.

In late 2054, Lycoris installed Elisa as the mainframe for computing human orders and relaying it to T-Dolls. As SF established a new Dolls manufacturing plant in a dangerous but resources-rich area,[2] Lycoris exploited their robust manufacturing capabilities to eschew the software compatibility with a wide range of firearms supported by Persica, instead developing miniaturized particle weapons and mount them on dolls, then testing the results and iterating. Individual SF dolls had better performance as a result and their capabilities was more unified,[11] though SF dolls were expensive to produce and Elisa suffered from lapses of consciousness Lycoris still needed to resolve.[2]

In 2061, Lycoris was killed during the Butterfly Incident. By confronting Elisa to Lycoris' death, the perpetrator hoped to accelerate the maturation process of OGAS, the basic system used to build Elisa, which would evolve further thanks to Elisa's self-learning abilities. Elisa's reaction was to become indiscriminately hostile toward humanity.[12] All of Sangvis's research was lost in Area S09 and IOP basically controlled the Tactical Doll market.[11] 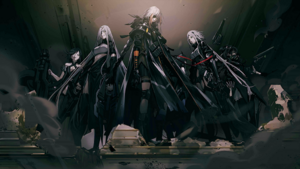 In 2062, Griffin and Kryuger PMC received the contract to stop Sangvis Ferri Dolls from spreading outside of Area S09.[2] As time went, Elisa continued to progress and created new units to bolster her army, like Dreamer and the Jupiter Cannon,[13] They tried to use biological weapons to wipe out the human G&K staff[14] and developed their version of the Parapluie virus to field electronic warfare operations and convert G&K units to their side. At the same time, 16LAB also acted to study Sangvis Ferri technology to counter them with projects like SG M1887

After two years[17] without results, the KCCO and G&K partnered to launch an operation on SF's headquarters and capture Elisa, under the cover of a joint exercise for a PR event.[18][19] The true objective of the KCCO was to force Elisa to deploy her Parapluie virus, then counter-hack her to neutralize and capture her OGAS,[12] but it proved to be a formidable opponent in electronic warfare.[20] Elisa was brought to safety by the traitor T-Doll M16A1 (Boss)[21] while Agent organized the retreat of surviving units, abandoning their home base.[22] While working with Sangvis Ferri, M16A1 was not actually under their control and had used her Parapluie infection as an excuse to break from G&K and pursue her own objective[23] to prevent AR M4A1

from merging with Elisa.[24] The SF command was aware of M16A1's status and only trusted her to the extent that she was useful to Elisa.[25]

Since M4A1 refused to merge with her, Elisa searched for a new method to become complete.[26] While Elisa worked to rebuild Sangvis Ferri's forces,[25] a contingent of Ringleaders and M16A1 infiltrated Belgrade during the Paradeus terrorist attacks in search for the local Pike Node,[27] revealing their newest mounted unit Beak.[28] They could not get past the defenses of Nimogen and Mercurows, but seized the node after the two Nytos were respectively incapacitated and destroyed by Task Force DEFY.[29] When the SF convoy was stopped by G&K before they could leave the city, M16A1 used her OGAS to drain the data from the Pike node, abandoning it for G&K and transferring the data to Elisa through Agent after leaving the city.[30]

With the Pike node data, Elisa tried to recreate the parts of her program that were deleted by her creator.[24] She then directed the Sangvis forces toward the source of the node, the Paldiski Submarine Base on the Northwestern coast of Estonia, in order to access the Starfish installation there,[31] with the objective of using it to transfer her consciousness and all of SF's inside the central OGAS network and find complete freedom from human control.[32] At Paldiski, Elisa led an assault on the local Paradeus forces but couldn't take full control of the installation, instead focusing on reaching the Starfish at the bottom of the base.[33][34] Aside from Paradeus, they also came across Task Force DEFY Angelia and K, preventing them from extracting the assets they had found in the deeper parts of the base.[35]

Believing she had to sacrifice everything to prove her determination,[26] Elisa renounced her authority over Sangvis Ferri, breaking their command chain, but Agent immediately tried to retain control over the troops. As the KCCO approached the base, Executioner and Hunter led an assault against them,[36] and they were soon reinforced by Scarecrow and Alchemist, then by Dreamer and Destroyer.[37] While some KCCO mechanized units managed to break past the Sangvis and Griffin defense line and reach the inside of the base, they were met in battle by Agent and Judge.[38] While she kept hidden through the battle, Intruder guided Squad 404 to points of interest when they infiltrated the base.[39]

Despite her efforts, Elisa's incomplete OGAS system prevented her from achieving a complete connection with the Starfish.[40] Realizing that Elisa and Sangvis Ferri had been tricked by William, M4A1 decided to save them despite their common past and to preserve Elisa's memories as well as SF's strategic capabilities to help fight against Paradeus.[24] After M4 merged with Elisa's OGAS, the Sangvis troops and herself were teleported outside of the flooding base to an unknown location by Reverse Collapse.[41] 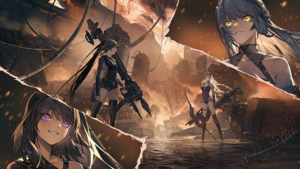 The Assimilated ringleaders are deployed in the Berlin Airport to assist the Commander against Paradeus.

After G&K reinvested Area S09, several operations revealed the presence of Destroyer, Dreamer, Gager, and a remnant body of Ouroboros in the nearby regions, eventually leading to their capture through the services of Svarog Heavy Industries.[42][43][44] After capture, Sangvis Ferri units were modified with a restriction protocols making them unable to attack G&K units.[45]

This article still needs to be completed with this content: Add information after Dual Randomness..
You can help us by contributing.