ELID mutants in Girls' Frontline. Left to right: Infected, Infected Soldier, Smasher. The Collapse Fluid is visible in green due to a marking compound in the Collapse bomb used.

The Eurosky Low-Emission Infectious Disease (低辐射广域性感染症 or 广域性低辐射感染症), or ELID (“EILD” or “ED”), is the result of exposition of the human body to the radiations of Collapse Fluid.[1] Persons who went through complete infection without dying start acting similar to zombies, and are called “ELID Infected” or “ELIDs” (“ED Infected”). Infected are hard to kill due to the layer of hard silicon formed over their skin. The Assault Artillery platform was originally designed to destroy ELIDs.[2] 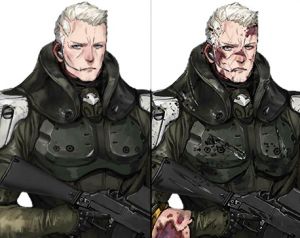 ELID symptom initial stages on Captain Yegor after he was exposed to a Collapse bomb explosion, notice the scorched skin. 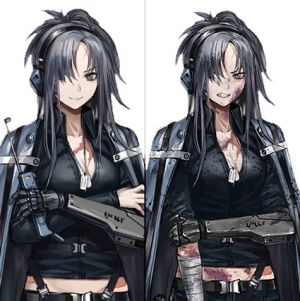 ELID symptom initial stages on agent Angelia after she was exposed to a Collapse bomb explosion, notice the scorched skin.

The symptoms for acute exposition to Collapse Fluid radiations (such as a Collapse Bomb) include coughing blood,[3] pain in the head and stomach[4] or a sensation akin to one's bones piercing through the skin,[5] convulsions,[4] fatigue, scorch marks on the skin and periods of unconsciousness.[6] Most people die directly from radiations due to their average body resilience, but healthy people like soldiers can survive to reach the worst stages of irradiation.[7] Despite this, children can still turn into infected.[8] Their muscles and blood vessels will harden as they undergo silication and their mind progressively withers to basic aggressive instincts.[7] Due to this stiffening the soon-to-be infected maybe unable to flex their fingers and turn their own weapon on themselves.[4]

Advanced ELID infection contracted by repeated exposure for short periods of time manifests physically as bluish-green skin, extremely fast aging made evident by geriatric wrinkles and crows' feet on the face, difficulty to breathe, muscular weakness and very unstable vital signs. Body amino acids decompose, connective tissues break down throughout the body, red blood cell count falls rapidly along with blood oxygen carrying capacity and the skeletal structure changes, undergoing calcification and increasing the density and hardness of bones to numbers up to 400 HB, far beyond conventional steel. Onset period increases as the body is repeatedly exposed to relics. Acute infection is fatal within 61 hours. Conversion to infected can take 24 to 48 hours, but necessitate the body to be healthy enough to survive DNA recombination.[9]

Standard ELID Infected are attracted to sound and moving objects not produced by other ELIDs.[10] The source of their killing impulse is unknown but they seem to attack everything but themselves indiscriminately and become more aggressive the longer they have been infected.[7] Infected seem to retain a certain degree of muscle memory, as demonstrated by infected soldiers actually firing their rifles haphazardly, though they are not capable of more complex actions like launching grenades.[11] Soldiers severely irradiated undergo skin and internal organs mutations that make them both larger and more resilient than other infected, becoming Smashers.[12]

ELID infection confers great resistance to the body. Even in early stages, as much as seven handgun bullets can be necessary to put an ELID down.[7] Infected staying in radiation zones for an extended periods of time will undergo more drastic physical changes, with D-Class infected being completely inhuman and monstrous in form, and extremely difficult to kill even for Assault Artillery platforms.[2]

The Nytos from Paradeus recognize ELID infected as “baptized” and refuse to harm them, even when attacked.[13]

ELID has been an ongoing problem during the exploration of relics sites, and spurred the development of the Weight Bearing protection system.[14] In early infection cases, before the 21st century, radiation sickness treatments were applied to no avail due to a lack of understanding of the mechanisms of ELID. This posed considerable problems as relics research ramped up during the Cold War, since infection vectors were unknown and no protection or treatment existed, leading to an estimated 150 000 ELID infections worldwide between the first documented case in 1976 and 1980, with about 10 000 infected. 50 000 new cases had appeared a year later, with a higher percentage of Infected and new mutation forms. High variance in infection conditions and combat data rendered global studies useless. Countries started to create special units dedicated to manage ELID cases, like the Chinese Special Circumstances Armed Police Force, but infection rate of these agents was high. The Dresden Accords and détente between the Soviet Union and United States permitted Anti-ELID vaccine research to begin in 1983, gradually reducing the number of cases.[9]

By 2023, genetic augmentations were available to boost resistance against ELID.[15] ELID vaccines were never particularly effective, but all research was lost during World War Three and the post-war world returned too quickly to conflict with the 2089 First Antarctic War for ELID vaccines to be rediscovered.[2] Despite this, as early as 2064, severe Collapse Fluid irradiation could be treated as long as the patient had not turned yet, as exemplified by Angelia and the Commander's survival. By then, direct conflict with ELIDs was not a common occurrence,[7] but enough ELIDs existed in the Belgrade region to pose a significant threat to the city once the quarantine walls breached.[16]