The unknown civilization had a radically different understanding of physics from mankind. They understood the most stable state of matter to be fluid rather than solid thanks to their fine control over subatomic particles, and particularly their ability to harness the natural attractive state of particles to reverse them in time to a previous spatial configuration. Collapse Technology can be understood as knocking a brick wall down, spreading the bricks around, and Reverse Collapse Technology as the action of reverting the wall to its original state.

Such feat is in contradiction with the modern understanding of quantum physics: as stated by Heisenberg's Uncertainty Principle, the direction and position of a subatomic particle cannot be both known at the same time. Yet, both these data would be critical in the effort of reconstructing any macroscopic object. This means that Collapse Technology is the missing bridge between micro and macro scales, the last obstacle to a unified understanding of physics.[3] 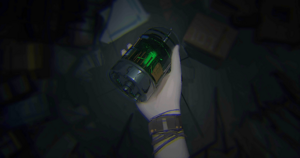 One of the five canisters of Collapse Fluid used as dirty bombs in Eastern Europe in 2064.

Collapse Fluid is the exotic matter used to disrupt the attractive and repulsive states of particles. It is not actually a fluid in the proper sense of the term, but rather a particle-wave expanding in the matter to be compressed, stopping its spread once it achieved a state of quantum stability.

Collapse Radiations (坍塌辐射)[5] emitting bottom quarks and photons are produced when Collapse Fluid permeates matter.[3] This makes Collapse Fluid harmful to the human body, spurring the development of the Weight Bearing project to protect human operators when exploring relics sites.[6] In the sites themselves, Collapse Fluid is generally safely contained in crystalline storage capsules, but human exploration has led to numerous incidents and expositions to Collapse Fluid. Humans exposed to a certain dosage of Collapse Fluid radiation contract Eurosky Low-Emission Infectious Disease,[7] leading to its military use in dirty bombs.

Another dangerous aspect of Collapse Fluid is its ability to build up heat under heavy pressure, leading to an explosion once the temperature reaches a certain threshold. This property was responsible for the First Beilan Island Incident.[7] A way to counter such an event is to evaporate the Collapse Fluid particles with molten plutonium, such as the one used in nuclear reactors.[8]

Mankind's progress in mastering Collapse Technology has been slow. Despite the widespread efforts to uncover new relic sites after World War Two, no country was able to study Collapse Technology in its full breadth of application until the establishment of the United Nations Relic Science Agency in 1992. In the 40 years after the war, even superpowers couldn't make use of the technology for purposes other than explosive weaponry.[3] Uncaring handling of Collapse Fluid became responsible for the First Beilan Island Incident, and indirectly World War Three.

In the 2070s, Collapse reaction piles were still needing miniaturization, and the maximum amount of mass able to be used in one Collapse or Reverse Collapse operation was limited to 24 tons. Advanced military applications of Collapse Technologies were employed by the Antarctic Union to gain a devastating strategic advantage over the Union of Rossartrism Nations Coalition during the First Antarctic War.[4]

Storage and transmission of matter[edit]

The primary use of Collapse Technology is as a form of extremely space-effective storage. It can also be used to easily transmit large quantity of matter over long distances. Relics using various forms of Collapse Technology were found in sites all around Earth, showing that it was widely in use.[3] Collapsed matter can then be displaced using microwaves.[4]

In 2049,[9] Hollow City applied Collapse Technology to supercomputers to increase processing speed and storage space by a factor of around 500 million, with no increase in size thanks to the ability to increase the spatial density of information and transmit large amount of data over long distances.[3]

In the 1970s, both the Soviet Union and the United States experimented with the use of Collapse Fluid as a non-nuclear weapon of mass destruction. The US scientists managed to interlace marking compounds and added a radial propagation system to their pressured containers in order to make the expansion of the Collapse Fluid clearly visible.[3]

In 2064, five radial-dispersion canisters containing small amounts of Collapse Fluid colored with a green marking compound were illegally used as dirty bombs in Eastern Europe by Bureau of State Security agent Angelia against Sangvis Ferri and the KCCO. When the explosives they were attached to detonated, the explosion vaporized all surface objects within 500 meters of the epicenter of explosion and immediately triggered ELID symptoms in nearby humans.[10] This event is comparable to the First Beilan Island Incident on a much smaller scale: the Collapse Fluid was subjected to the intense pressure of the explosion, creating in turn a bigger explosion before spreading radioactive Collapse Fluid particles in the area.