Function Cards are objects that influence battles in Project Neural Cloud by changing the effects and strategies of automated attacks. Function Cards can be active from the start of a stage, or earned as the player is progressing in the stage. Only one of each Function Card can be owned at once, duplicates of the same card serve to upgrade the card. There is also a limit to the Deck Size that can be increased, but the player will need to discard any Function in excess to continue playing.

Active Functions are special Function Cards of max rarity which can be activated in battle by the player. They take the form of the Ultimate Skill of a Doll, even ones the player doesn't have.

Protocols are objects related to Functions that severely alter the attributes and strategies of all units. They can be wholly beneficial (green icon) or detrimental (red icon), or somewhere in between (yellow icon). 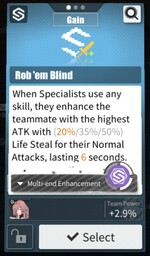 From top to bottom and left to right: