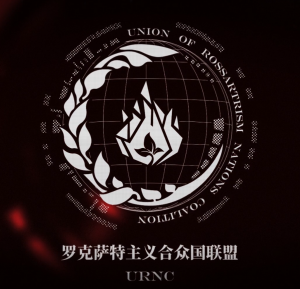 The Union of Rossartrism Nations Coalition[1] (联合政府罗克萨特主义合众国联盟) is an alliance of nations formed in 2064 after World War Three, following the doctrine of Rossartrism. The URNC are credited as main proponents of the new world economy after the war, but their political tensions with the Antarctic Union led to the First Antarctic War.

The birth of the Coalition helped restart the world economy after World War Three.[2] The Coalition was the first nation to open diplomatic relations with Hollow City after the war[3] and to receive help from their advanced technology in what is known as the Ten-Years Honeymoon.

The new technologies helped cities closest to the South Pole to become prosperous again thanks to recoil-decay barriers, 300 meters tall particle neutralizing systems used to decontaminate areas touched by the Collapse Fluid clouds or striked by nuclear warheads. The system was expensive to deploy, as it needed one generator every 2 kilometer in a closed loop, but was deployed successfully in important sectors.

Nevertheless, relations gradually soured as the citizens of the Coalition realized the classical socialism of Hollow City was not compatible with Rossartrism, that their advanced technology could be a potential threat, and that their radically different living environment made them culturally incompatible. The Rossartrist populace eventually demanded for harsher political measures against Hollow City.

Tensions culminated in 2078 when several fringe countries of the Coalition left to become allies of Hollow City, forming the Antarctic Union, and a definitive threat in the eyes of the Coalition. The Union attempted to take a non-aggressive stance and withdrew all personnel and ordnance from countries still in the Coalition's territory, but the sudden stop in investments and bilateral trade only worsened the Union's image. The Coalition later passed the Antarctic Limitation Act, containing numerous discriminatory laws against citizens of the Union, such as denying them the right to own land, restricting movements between Union territory and core Coalition countries, economic barriers to change the trade deficit in favor of the Coalition, and restricting the use of Union currency inside the Coalition. The Union reacted by calling its citizens to return to Union territory, which was also condemned by the Coalition.[2]

The Three Goddesses project launched in 2078 as a collaboration between Coalition and Union scientists produced three viable test subjects. When the project fell through due to political tensions in 2085, the Coalition retained control of subject Noel, and searched for the whereabouts of the lost subject Jefuty.[4]

In September 2089, the Union military launched operation Snake Killer, a preemptive strike in Coalition territory in an effort to protect its citizens, making the first move in the First Antarctic War. At the time, the Coalition thought nothing of the war declaration as they considered a congregation of only 30 million people to be incapable of posing any threat, but the Coalition army soon realized that Collapse Technology enabled the Union troops to hold disproportionate advantages over their forces. The attempt of naval blockade against Antarctica resulted in devastating losses to the Coalition fleet, and the relatively non-aggressive stance of the Union probably saved the Coalition from one-sided devastation. On its own fringe territories, the Coalition kept the Union at bay with random saturation bombardments of their transfer bases by large quantities of long-range guided missiles, and Union troops refused to launch counter-attacks deep in enemy territory to neutralize these strikes, so the war became a stalemate.

It was painfully clear to the Coalition that Collapse Technology was necessary for them to rival with the Union, and the ongoing moratorium on relics site research was lifted as investments in theoretical physics increased. To hasten critical discoveries to less than a year, the Coalition decided to use the most direct method at their disposal: perform reverse-engineering on activated relics. This would require a complete genetic sequence from a specimen of GAVIRUL.[2] However, Noel could not activate the relics, so the search for the lost subject Jefuty intensified.[4] The Coalition located and successfully recovered Jefuty in the Caucasus in 2092, foiling the Union's own capture plan, operation Bakery.[5] Two years later, the Union launched operation Kindle to recover Jefuty from the Bear's Den relics site base. When the local Coalition commander ordered the use of Assault Artillery systems within the relics site, an event similar to the one that had led to the First Beilan Island Incident occurred, and the Union and Coalition high commands had to collaborate to avoid a new apocalyptic disaster. Sacrificing their career, the Coalition government leader authorized the Union air force to deploy a missile containing a molten plutonium payload to utterly destroy the Bear's Den.

The high cost of operation Kindle for both factions prompted the new Coalition head of government to enter peace talks, and a ceasefire was signed in 2094.[6] Proactive intelligence work continued nevertheless and both factions were implicated in the Second Beilan Island Incident.[7]