K is an agent working with the Neo-Soviet Bureau of State Security on cases related to the mysterious sect Paradeus. He collaborated on multiple occasion with Griffin & Kryuger and Angelia, acting as an informant and middle man with state authorities. He is also part of the entourage of Gilda Ulrich.

K's full name is Kain Schwaben (凯恩·施瓦本), a Major in the East German Ministry for State Security, the Stasi.[1] K first met with Paradeus in Southern Europe, where he realized they were not like other Yellow Zone cults but a truly dangerous terrorist organization with exceptional resources.[2] In Southern Germany, he encountered prototype Nytos being smuggled by illegal orphanages.[3]

K is stoic, rational, resourceful and enigmatic by trade. He lives a spartan life[4] and makes careful use of the assets at his disposal, which led him to put Griffin & Kryuger under heavy duress during the Belgrade events. He would however get a taste of his own medicine when negotiating with Statesec during the Paldiski Submarine Base assault.[1] According to J, K's biggest flaw is that he actually looks like a spy, which is not a good thing in their line of work.[5]

K is close to Gilda Ulrich and is one of the few people she has complete trust in.[6] While K's methods are often at odds with Angelia's, they ultimately share the objective of protecting innocents from Paradeus and Angelia considers K and his close collaborators to be the few people who cannot be Paradeus spies.[7] He has a rivalry of sorts with fellow Stasi agent J.[8]

K has several versions of an A-Doll maid named Marlohe, who is programmed to help him in his work and is also heavily and illegally modified with concealed blades and top of the line electronic warfare defenses.[9]

K first worked with the Commander and Griffin & Kryuger in Belgrade, where he was initially presented by Havier Witkin as an informant privy to Paradeus activity in the city, though they were only given a photograph to locate him.[10] While AR Team failed to locate K on hacked city surveillance footage, probably due to K's counter-surveillance training, they noticed his maid doll, Marlohe, and interrogated her[11][12] before she was destroyed by a remote-controlled neural meltdown.[9] One of K's safehouses had been found by Paradeus, who had conducted a assassination but only destroyed a decoy doll[13] while K fled using a secret passage through the city's sewers. He was found by MG Mk46

's team[14] and welcomed Griffin to Belgrade with intel about Paradeus' and Angelia's presence in Belgrade.[15]

He then revealed that G&K's presence in Belgrade was not to capture Angelia as previously stated by Statesec, as this was only a pretext to lure them into helping protect peace talks between the Neo-Soviet Union and the Pan-European Union's chairwoman Gilda Ulrich in the city.[4] K also directed Angelia during the events.[16] While K had arranged for a contingent of undercover Statesec agent to protect the meeting, they were overwhelmed by Paradeus' assault and their command center destroyed, forcing K to rely on G&K's units.[17]

After G&K brought Ulrich to safety in a nearby church, K ordered them to escort her outside Belgrade to be airlifted, and to knock her out when she refused to leave until the other civilians were safe. The Commander refused to comply with the order, pointing out that K would still have resources since he could afford to be safe. K relented and dispatched a convoy but warned the Commander they would pay for forcing his hand.[18] He however could not send reinforcements to help Angelia contain the ELID infected outbreak in the city since all Statesec agents had been killed.[19]

After a fight with Nimogen and Mercurows, G&K successfully delivered Ulrich to the extraction point while AR Team recovered the Pike Node that was Paradeus' objective. Contrary to what he had promised to Angelia, K planned to hand the asset over to Statesec, having placed it under the Commander's guard to prevent Angelia from trying to take it by force.[20]

K was dispatched at the Paldiski Submarine Base as Angelia's watcher.[21] While they discovered the Paradeus lab in the base, they were trapped in when Sangvis Ferri launched their assault on the base.[22] K took command of MG RPK-16

to reach the surface and find the base's gate control room, but he was hit by a bullet and passed out during the mission,[23] only waking up after G&K invaded the base to prevent the KCCO from taking it.[24] With Angelia holding critical Paradeus assets, K was willing to use all his resources to secure their retrieval[25] and was forced to invoke his position as a Stasi liaised agent to negotiate the intervention of Statesec against the KCCO forces,[1] eventually obtaining an air strike.[26]

In order to deny the infiltrated KCCO mechs access to the base, the Commander and K took to the field to plant explosives on the base's sea valves and flood the base.[27] 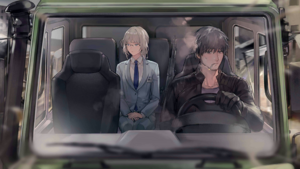 K's awkward drive with AR AN-94

, sent by Angelia to monitor him.

Continuing to collaborate with Angelia to stop Paradeus, K arranged for Task Force DEFY's plane drop in Bremen and provided them a safe house and contact with the entourage of senator Ulrich. Since Angelia asked the Stasi to not involve itself in her investigations,[28] K mostly kept away from the events that unfolded, only being present in the aftermath of the Bremen refugee settlement uprising, taking terrorist Wolfgang Hopps into custody.[29]