This article still needs to be completed. You can help us by contributing. 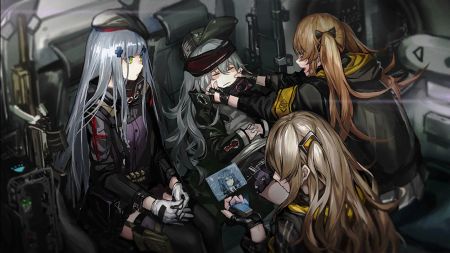 Squad 404 at the time of Parapluie deployment. Clockwise from the left: AR HK416

, all able to act illegally without human orders. The squad was established after the Butterfly Incident and regularly acted as black ops mercenaries for Griffin and Kryuger[1][2] and Angelia.

Under the command of UMP45, 404 uses any tactics necessary to efficiently satisfy their contracts, regardless of the cost for anyone unrelated to the squad or their objective.[3][4] They make use of unique electronic warfare skills such as fake Sangvis Ferri comms signals to hide themselves in enemy territory[5] and a special authorization program that let them delete all recent memories of 404 from the neural cloud of T-Dolls they interacted with[6] (though 416 doesn't do this for missions unrelated to Squad 404).[7] For these reasons 404 are mostly known through nasty rumors among T-Dolls[8] but they are also said to be reliable night ops experts.[9]

The squad has excellent track records[10] despite being somewhat dysfunctional, mostly due to 416's lack of trust in 45 and frequent outbursts against G11's laziness. 404 also antagonizes AR Team due to 416 and 45's past with AR M16A1

The Commander had their first contact with 404 when they deployed their troops to support the squad as they investigated the area where AR Team fought Agent in order to track her. The mission was simple enough for UMP9 to handle by herself, and HK416 used the opportunity of AR M16A1

's presence in the area to confront her alone, claiming she would use her newfound freedom from human orders to kill her, but was defeated instead. UMP45 later came to pick up 416, exchanging veiled threats with M16 as well as a cryptic Sangvis Ferri message she had picked up earlier, warning about the imminent deployment of Parapluie.[13]

Five days after SF's assault on G&K's secret base and the deployment of Parapluie, Helian hired 404 for a large sum of money and granted them an emergency command authority over local G&K T-Dolls and equipment to conduct Operation Cube : find and capture a heavily defended comms jammer in Area S06 hampering G&K's counterattack efforts. 404 came up against the Ringleader Ouroboros and had to flee in an abandoned G&K active camo recon aircraft provided by G&K's recon doll HG SPP-1

after their initial approach was blocked by Hunter. 404 then mounted guerilla attacks against Hunter before Ouroboros remotely wiped Hunter's neural cloud to prevent her data from falling into 404's hands.

Pushing toward the jammer, 404 mounted a new guerilla operation against Executioner, but fell into her and Ouroboros' trap when they pursued Executioner into the explosive-rigged jammer base. UMP45 then bluffed her way out of the situation by promising Executioner they would give Hunter's body back to SF if Executioner delayed the explosion by two minutes so 404 could leave unharmed. Executioner accepted and 404 tracked down and killed Ouroboros, using her body and the intel gathered during the mission to compensate G&K on the loss of the jammer. However, the entire jammer defense was a trap set by Agent to lure and introduce Parapluie in the neural cloud of new T-Dolls.[14] Despite 404's screening by MG MG5

after the operation, 416 became suspicious of 45 since she was the one who touched the jammer.[15]

Helian hired 404 again during Operation Hypothermia[16] to rescue AR Team after their aircraft was downed by Jupiter cannons in Area S03. 416 participated in the operation despite the involvement of AR Team and her suspicions toward 45. While tracking AR, 404 came into contact with Architect, who initially ignored them but later received permission to perform live-fire exercises with her Jupiter cannons using 404 as targets. After baiting Architect out of her command base, 404 bypassed her cannons field and linked up with AR, where 45 took an interest in AR's new member SMG RO635

, prompting M16 to warn RO that should she rely too much on 45's strategic decisions, the Dolls that were neither part of 404 or their objective (that is, AR Team) would become casualties.[15] They then forged a path toward the heliport where G&K would drop their reinforcements, but a delay forced them to face both Architect and Gager.

Deploying the other T-Dolls under SG M1887

's command to delay Gager's forces, AR waited for 404 to infiltrate and disable the defense of Architect's base before raiding it and destroying Architect. As Gager's forces unexpectedly focused on destroying M1887's group instead of rushing to Architect's help, RO redirected AR Team to a transmission outpost to call for the Commander's help, leaving 404 to wonder if they had been betrayed. As 45 was calling the mission out despite 416's protests against abandoning the other Dolls, they received help from RF WA2000

thanks to the Commander's fast deployment. 45 decided to not hold any grudge against RO's risky decision out of fondness for her before wiping 404's involvement from the neural cloud memories of all T-Dolls on site and disappearing.[17] 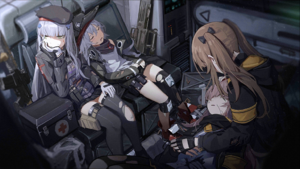 Squad 404 in a non-canonical ending of Continuum Turbulence Chapter 2.