There are two characters in the world of Girls' Frontline with the name Lunasia.[1] 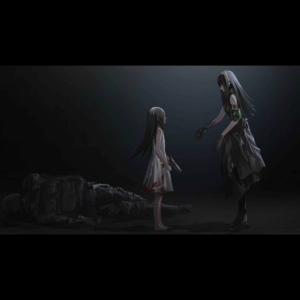 (right) meets the Lunasia clone (left) who served as the imprint for her Neural Cloud after Persica removed her personality limiters.[2] 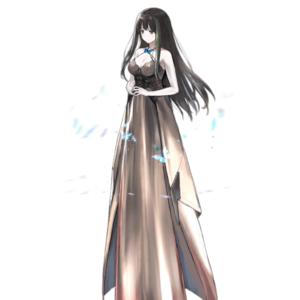 Lunasia von Oberstein was the eldest daughter of Rudolf von Oberstein, former director of Max Planck Institute of Computer Science in Germany. In the 2040s, she often visited the lab of Lycoris and Persicaria in the institute,[4] before the von Oberstein family was forced into hiding after Rudolf's political standing fell through due to his connection to Relic Technology.[5] Lunasia died from illness[5] in hiding some time after the end of World War Three.[6] Lunasia also had a little brother who took care of her in her final years.[7][5]

After Lunasia's death, the 90wish member going by the name William wanted to revive Lunasia in a form that would also enable him to use Relic Technology.[8] He contacted Lyco and Persica and provided them with a human brain imprint to make a Neural Cloud from it, but after they discovered Lunasia's memories in it, they refused as themselves and Rudolf were opposed to such experiments. William then used a more devious plan to reach his goals.[5]

William first had a Pike node delivered to Lyco after he joined Sangvis Ferri.[9][8] The OGAS code base in the node enabled Lyco to create Elisa in 2054.[10] As he continued to enhance her, he realized she was capable of interacting with Relic technology, and that he was being manipulated by William. Lyco sabotaged parts of her code,[11] but was killed in retaliation during the 2061 Butterfly Incident.[5]

William also created biological clones of Lunasia and had them attack several Griffin & Kryuger bases during the course of 2057. Through G&K's connections with IOP and 16LAB, Persica realized the nature of the attackers and made scans of their brains herself to use as a base for her research.[5][12][13][14] Wanting to match Lyco's research progress, Persica decided to ignore that she was being manipulated by William,[5] and even shared the scans with Lyco to use as a personality baseline for Elisa. Persica claimed the human origins of the data model made it closer to a soul,[15] but the data had a limited number of use.[16] She used the scans to create AR Team: first AR M16A1

. The initial results produced Neural Clouds which could not be duplicated and backed up, effectively making them “mortal”.[20] Persica reduced the amount of Lunasia's personality in RO635's Neural Cloud and managed to make it more stable and could be backed up.[16] After all personality limiters on M4A1's Neural Cloud were lifted by Persica,[12] Elisa, Dandelion and the Isomers identify her as Lunasia[21][22] since her Neural Cloud is the most perfect recreation of the original model yet (though M4 herself rejects this name)[23] while AR-15 had an excellent but imperfect Neural Cloud.[24]

Meanwhile, William created biological clones of Lunasia, cybernetically enhanced their bodies and modified their brains to develop a Neural Cloud, before implanting them with an OGAS consciousness. Subjects who could not withstand OGAS were discarded and called Isomers,[25] while those whose mind remained intact were called Nytos. However, no Nyto was considered sufficiently close to the original model.[26]

Long straight black hair is a trait shared by characters close to the original Lunasia.

This Lunasia is one of the three test subjects produced during the Three Goddesses project in 2078, along with Noel and Jefuty. Her DNA is a mix of human and GAVIRUL genes, and a reproduction of a test subject from the earlier Black Lily and White Rose project, Rose.

When the Three Goddesses project fell through due to political tensions in 2085, Lunasia went under Antarctic Union control, while Noel fell into the hands of the Union of Rossartrism Nations Coalition and Jefuty's whereabouts were lost in the confusion. However, both Noel and Lunasia fell short of initial expectations when they failed to activate relics sites. Both factions then went to search for Jefuty.[27] Lunasia's situation is unknown as she was not involved in operations Bakery and Kindle like her two sisters.