From IOP Wiki
< RPK-16
Jump to navigation Jump to search

This article still needs to be completed with this content: story after Chapter 13.
You can help us by contributing.

RPK-16 was first mentioned on Chapter 12-4 Emergency, from encrypted message packet received by Kalina sent by Angelia. The message was damaged as it's scrambled from jamming, and Kalina asked SMG UMP45

to decrypt it as AR M4A1

UMP45 finished repairing the message packet, and Kalina put it on the big screen. RPK-16 informed that she has managed to took control of the gate in the barrier walls to Paldiski Submarine Base, but she lost contact with Angelia and the other members of Task Force DEFY. The way is open and they’d hold the fort and wait for Griffin to arrive.

RPK-16 finally made her appearance on Chapter 2, guarding the gate control room along with AR AK-15

to arrive. K was commanding them but he took a bullet from Sangvis ambush, but managed to order them to hold their position before passed out. After opening the gate, UMP45 and HK416 continued their mission to find Ange and the remaining of DEFY, and told RPK-16 to link up with Griffin as they will provide support. RPK-16 contacted Commander through the radio, informing that northern barrier wall has been breached, with the probability that KCCO used it to enter the base. She knew that Commander already sent a team to seize the shore gun, and urged the Commander to keep an eye to the team movement.

After being together with Griffin force in struggle to repel the KCCO troops from entering the base but still failed, it's time for their jolly cooperation to end. Angelia ordered RPK-16 and AK-15 to link up with the rest of DEFY, to stop the remaining KCCO troops. The two made contact with AR AK-12

in the depth of the base, carrying out plan to put the end to Yegor once and for all.

The sound of explosion in the distance alarmed them that Yegor is coming. RPK-16 emptied her magazines at Yegor's mech to draw the attention, and Yegor replied by sending two grenades to her position few seconds ago. The blast still managed to knocked her to the ground despite she was behind cover. AK-15 and AN-94 executed the next attack on the mech's leg, and Yegor retaliated by using various of his mecha arsenals. In the end, Yegor managed to bring them down but AK-12 was able to execute the final attack. The curtain finally closed for Yegor. 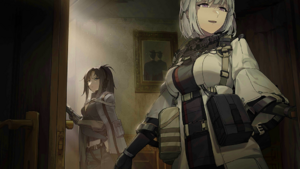 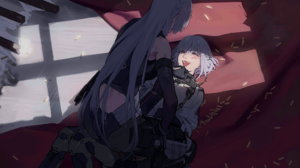 fights with RPK-16 in the mansion. 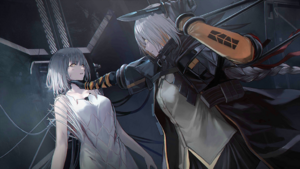