This article still needs to be completed with this content: story after Mirror Stage.
You can help us by contributing.

Griffin Lyons (格里芬•莱恩),[1] also called “The Earl”, is a British Rossartrist agent active in the European secret service community, and the co-founder of Griffin & Kryuger along with Berezovich Kryuger. He makes his first appearance in Mirror Stage.

Griffin worked as a secretary in London's Cabinet Office in the early 2000s,[2] and before World War Three he was a military man who worked for a branch vaguely referred to as “Six” or “the Sixth”.[3] He established his own news agency in Germany called WAVE, then met Lycoris, a student of Leipzig University, in 2040.[4] Griffin later joined Oxford University, where he was recruited into Rossartrism on recommendation from Major General Isaac of the CIA for his experience and knowledge of Europe[3] and North America, in the 2050s. At the time, Griffin had seen through his own economic and political analysis that the world might not recover from the war.[5]

In 2052, Griffin met one of his acquaintance, retired Ministry of Internal Affairs officer Berezovich Kryuger, in Moscow to convince him to start a PMC named Griffin & Kryuger that would use Tactical Dolls instead of human soldiers, in order to boost confidence in Doll technology. Griffin would perceive dividends but leave complete operational control of the company to Kryuger.[6] Inside G&K, multiple rumors circulated about this mysterious second founder.[7]

Griffin is middle-aged, sports white sideburns and glasses and has a tall nose, gray eyes and deep mellow voice. His appearance matches his general behavior of a stereotypical Englishman presenting himself as resolute, gentlemanly, proud, distant and (according to Angelia) extremely pretentious.[8] The Commander described him as vastly different from Kryuger, but equally bold and driven.[9] Appropriately, he used a Griffin as his personal sigil, on the wax seal of his envelopes[10][11] and personal coins.[1]

Despite acting in Rossartrist interests, Griffin qualified Rossartre as a pioneer, but also an idealist. He supported the use of coercion and large-scale manipulation to enforce the rules and order needed to attain world unity, arguing that righteous people could hold this power without misusing it.[7] He was close to Mikhail Tsvigun, Victor Zelinsky[1] and Shaw.[9]

Griffin has several Dolls under his direct command. HG Kolibri

were members of his personal guard.[12] His personal Squad Griffin, made of HG Derringer

. All five been in his service for years,[13] but he lent them indefinitely to the Commander starting from their operations in Berlin so they could learn to fight efficiently against Paradeus.[14] 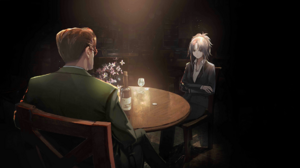 In the second half of 2064,[15] Griffin plotted to foil William and Paradeus' Operation Cocoon in Berlin before they could carry out their terrorist attack.

Using his connections with Zelinski and Tsvigun, he had Angelia operate in Germany, and after she was captured by the Stasi in Bremen, arranged her release after she was jailed in Berlin before inviting her to meet in person at his own hideout, the Old City bar “Athena's Owl”. He gave her the mission to decipher how Paradeus planned to carry out their attack, though Angelia was reluctant to work with him, despising his attitude and methods. In exchange for her collaboration, Ange demanded the location of the manor connected to William she had come across in the data she recovered during the battle of Paldiski, though Griffin dismissed it as irrelevant.[8]

Griffin also sent Kryuger orders to give to the Commander, AR Team and Dandelion, though Kryuger warned them not to trust him.[10] Griffin had them capture Machlian in the gated community of Bohnsdorf and sent Squad Griffin to help them flee from Paradeus into Berlin.[11] Griffin's goal was to verify whether or not Machlian was the same person as Morridow, and to have the Commander collaborate with Angelia on her own mission. Griffin introduced himself over holographic communication in the safe house he lent them, along with Squad Griffin. They briefly discussed Rossartrist ideas, and the Commander voiced their disagreement with Griffin's readiness to forgo justice and decency to reach his goals.[7]

After analyzing Machlian's virtual cognition image, the Commander reported to Griffin about her visions of a plan to plant multiple Epiphyllum bombs around Berlin.[16] Griffin found the locations appearing in each vision and provided them the legal authorizations needed to conduct a search. After finding the bombs and battling Paradeus in an abandoned U-Bahn station, the quarantine wall and Bohnsdorf,[17][18] the Commander reported that Machlian's visions were true. Griffin asked to hand Machlian over so he could search her memories for clues about William, but the Commander insisted to take her with them to defuse the last set of bombs in the Berlin prison.[19] They eventually took her to an abandoned Paradeus lab, where Squad Griffin sacrificed themselves against Narciss as per Griffin's order to protect the Commander when Paradeus trapped them in the building.[20]

During her investigation, Ange pinned Gray from Galatea Corporation as the leader of Paradeus in Berlin[21] and raided one of Galatea's warehouses outside the city in search of evidence Griffin could use to neutralize her. But she failed to procure anything after the Paradeus forces destroyed the building and Galatea quickly discarded any trace of their involvement.[22] Griffin warned her to conduct investigations and not seek open conflict, pressuring her by saying that her failure would lead to a repeat of the tragic events of Beslan that scarred her during her childhood.[23] However, Ange could not out-maneuver Gray and since she couldn't contact Griffin directly, raided Athena's Owl and, in a hidden backroom, found the location of the manor.[24]