From IOP Wiki
< M870
Jump to navigation Jump to search

M870 Possesses the skill "Highway to Hell", a very strong defensive skill which functions very similar to the Force Shield that certain SMG's use, said Force shield is also the same force shield a certain faction of enemies use and this page will give commanders a better understanding of the Force Shields defensive properties.

In terms of Stats, M870 possess very solid Defensive stats, possessing a high Armour Stat, tying herself with other dolls like SG Saiga-12

as well as possessing a reasonable DMG stat, she's able to deal solid damage for an SG, her HP stat places her amongst the highest but not THE actual highest HP SG. Overall a very strong Defensive SG capable of surviving prolonged battles.

Due to the nature of her skill and the general role of Defensive SG's this section in particular will cover the base mechanics behind M870's shield and how it works.

Ever since Major Event Continuum Turbulence was first released on the CN servers, Force Shield based skills received a rework changing how they function, originally they negated all forms of incoming damage while the skill was active, following the rework, they technically do the same, however they instead reduce incoming damage done by percentage based on their current "Max Defence" Value.

M870 was introduced in said Major Event as a drop and also possess a Force Shield based skill however hers specifically mentions what her max defence value is for her skill and that her "Current" Defence value decays as the skill is active. Below is a table of how much incoming damage is REDUCED while her skill is active for each respective Skill level. If the section is left as 0%, it means the skill has gone on CD by that time. 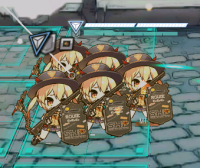 Picture of M870 with an SL-10 Skill during its initial skill activation. No damage is received 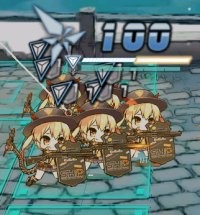 Picture of M870 with an SL-10 Skill after decay. Damage has been taken.

As you can see, M870's Force Shield gradually loses strength so she'll end up taking more damage as her shield decays. Another thing to note is while her skill does have a "Current" Defence value, it also does have a "Max" Defence value which is a fixed 1000. This is where the percentages are determined. On SL-9, her Current Defence is 950 which is 95% of her Max Defence Value, so all incoming damage will be reduced by 95%. On SL-10 however, for the first second of her skill's duration, she'll reduce all incoming damage by 100% meaning she'll completely ignore all forms of damage for that first second. This is also why SMG dolls like SMG Thompson

are completely immune to all forms of damage while their skills are active, because their force shields have both their Current and Max Defence Values at 9999.

Now this doesn't make her completely immune to damage. Force Shields can still be damaged by enemies possessing 2 particular stats, a "Lethality" stat and "Piercing" stat. These stats may be familiar as our HOC units also posses these stats. Now almost all enemy units in the game dont possess these particular stats, however there are some that do so be mindful of this. Enemies which posses skills that bypass armour/EVA or can damage multiple dummy links, ARE AFFECTED BY THE DEFENCE VALUE! So damage done by these forms of attacks will be reduced, such examples can come from Cyclops's AP grenades which can be reduced down to doing 1 ~ 5 damage (Depending on M870's dummy links). However special installation units such the missile launchers on some maps (not Jaguar's or Jupiter Cannon's) have both a Lethality Stat and Piercing Stat, meaning they can damage M870 directly bypassing her shield which is VERY DANGEROUS!

Lastly, M870's Force shield can also stack with HP shields and other Damage reducing barriers. This is incredibly effective in further reducing incoming damage done to M870, as HP shields treat the shielded doll as a unit with 1x dummy links, so Grenade based damage will only do 1x damage, not 1x damage x target dummy links. So pairing her with HP shield giving units is an excellent idea.

Being an SG, M870's tiles will benefit all MG's by granting them additional DMG and ACC, however M870's tiles will only be able to buff 1 ~ 2 MG's depending on where she's placed on the frontline. Dont let this bother you too much though and be sure to make the most of it.

is a Defensive oriented SG, meaning she'll benefit MGSG echelons which are aimed for prolonged battles. MG's that grant additional armour buffs via their tiles are a must have pair, such MG's include; MG Negev

and a few others, Though with M870's base stats, one can consider pairing her with MG's that grant minor offensive stat buffs such as DMG, ROF and ACC.

Additionally, T-Doll's which grant HP shields are also exceptional pairs with M870 as they can stack with M870's Force Shield, greatly reducing incoming damage taken. Such shield using dolls can include; SG S.A.T.8

and if you were present during the Valhalla collaboration event, then HG Sei

is also an ideal pick.

M870 cannot tank by herself, so be mindful of who you pair her with, with M870's particular skill, she should be your primary tank and not your secondary tank so she should be receiving the brunt of Armour tiles. An ideal partner for M870 is SG FP-6

as she's able to apply damage reducing shields to 2 random dolls in the same column as her, these shields can also stack with M870s force shield further reducing incoming damage, her tiles as well can also compensate by buffing the MG who'll be on tile 1 while buffing the backline at the same time.