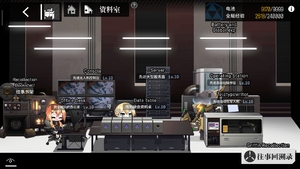 Command and Intelligence Center (CIC) Room, or better known as Data Room, is one of several facility that support Griffin & Kryuger base on Sector S09. Its main function is to manage global exp gained from battle and convert it into

combat reports. Kalina will be tasked to write them, and the process will cost

special combat report. Although they cost the same to produce and worth the same amount of exp, they are used for slightly different purpose. The first kind of combat report is used for T-Doll and fairy, while the second one can only be used on HOC units. The third kind isn't available to produce, and can only be obtained through combat simulation. This one is used to raise the level of Coalition units.