DROP Not obtainable as a drop.

REWARD Rewarded to players after clearing chapter 4-6 for the first time. This AR M16A1

The M16 rifle, officially designated as the 'Rifle, Caliber 5.56 mm, M16', is the US military version of the Armalite AR-15 rifle. It is an air-cooled, gas-operated, magazine-fed assault rifle with a rotating bolt, and utilizes the direct-impingement system from Eugene Stoner's AR-15 rifle. Colt's model name for the M16 rifle was 'Colt Model 603'.

During the early years of the Vietnam War, US troops were outfitted with the M14 battle rifle, chambering the 7.62x51mm NATO cartridge. Reports from in the field indicated several problems with the M14, with the most often-cited complaints being that the rifle and its ammo were too heavy, and that the gun was nigh uncontrollable in full auto thanks to its powerful cartridge. Calls for a new infantry rifle chambering an intermediate cartridge began to grow. In 1958, the US Army ran experiments with small squads in combat situations using the current M14, the AR-15 rifle, and a third rifle designed by the Winchester Repeating Arms Company. The resulting study recommended adopting a lightweight infantry rifle like the AR-15. In response to this study, the Army elected to instead ramp up production of the M14. However, the AR-15 had gotten the attention of the US Air Force. After conducting its own test of the AR-15, the US Air Force decided to adopt the rifle as standard issue, and ordered 8,500 AR-15s.

Extensive tests were conducted on the AR-15 in 1962 and 1963. While most evaluators praised the weapon's light weight, reliability, and effect on target, officials from the US Army Material Command cited issues with the gun's long range accuracy and lack of stopping power out at far ranges. Despite these complaints, the US Special Forces would be given permission to adopt the AR-15 as standard issue in 1963. With so many within the Armed Forces speaking positively about the AR-15, an investigation was opened into why the weapon had been rejected by the Army. The investigation found that the Army had rigged the previous tests, selecting tests that would favor the M14 and choosing match grade M14s to compete against factory stock AR-15s.

In January of 1963, then Secretary of Defense Robert McNamara personally ordered a halt to the production of M14 rifles, after receiving reports that production was incapable of meeting demand. At the time, the AR-15 was the only rifle that could fulfill a requirement of a "universal" infantry weapon. McNamara ordered the AR-15's adoption, despite receiving reports of several deficiencies with the design, most notably the lack of a chrome-plated chamber. At this point, the Army finally relented and recommended adoption of the AR-15.

After undergoing some modifications, the AR-15 was adopted as the 'Rifle, Caliber 5.56 mm, M16'. In 1964, the M16 formally entered American military service, and the following year was deployed to troops in Vietnam. Almost immediately, reports began to surface of issues with the rifle in the field. Despite all the modifications made prior to adoption, the M16 still did not feature a chrome-plated chamber, which resulted in issues with corrosion and stuck casings. The ammunition being provided with the M16 featured a new high-performance propellant, which had the side effect of producing more powder fouling. This might not have been as much of an issue if Colt had bothered to ship the rifles with cleaning kits (Colt had marketed the M16 as a 'self-cleaning rifle', a claim with no basis in reality). This led to the M16 gaining a reputation among soldiers as a jam machine and a plastic toy.

In early 1967, a number of improvements were made to the M16 to address these issues, including finally switching to a chrome-plated chamber. The modified version of the M16 would be designated as the 'M16A1'. In addition to the modified rifle, cleaning kits and instructions on servicing the rifle were issued to troops, and a new powder was introduced that reduced carbon fouling. Following these changes, the number of reliability problems greatly diminished and the M16A1 rifle finally achieved widespread acceptance by U.S. troops in Vietnam. By 1969, the M16A1 had officially replaced the M14 as the standard infantry rifle of the US Army.

One of the most distinctive design features of the M16A1 is the large carry handle located on the top of the rifle. In the earlier AR-10, this carry handle was designed to protect the charging handle, however the charging handle was moved to the rear of the receiver on the M16. This large carry handle does make it difficult to put a scope onto the rifle, however. Modern versions of the M16 feature detachable carry handles and full-length Picatinny rails to allow easier mounting of optics. Other notable features of the A1 variant include the triangular black polymer handguard and 'bird cage' style flash hider. The magazines provided with the M16 were made of stamped aluminum, and were meant to be a lightweight, disposable item. Originally offered with 20 round magazines, the Army would later switch to larger, curved 30 round magazines. The M16 magazine became the basis of the NATO STANAG pattern magazine, which is used in numerous weapon systems around the world.

Eventually, M16A1 models would be retired from standard infantry service, and were replaced by the newer M16A2 variant by 1980. Retired surplus units would be sold to domestic firearm enthusiasts and exported to foreign markets. Many other nations would go on to use M16A1 rifles as their standard service rifle. Currently, the M16 is in use by 15 NATO countries and more than 80 countries worldwide. Together, numerous companies in the United States, Canada, and China have produced more than 8,000,000 rifles of all variants. Despite its early reputation as a cheap plastic toy, the M16A1 has become a mainstay of US Military operations, and one of the most ubiquitous firearms in history. 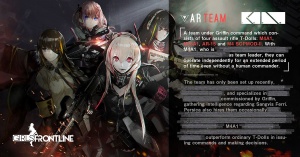 M16A1 is designed by the same artist as most of the AR Squadron, UmiNeko (海猫络合物). UmiNeko is also responsible for illustrating AR M4A1

. M16's unique side bang colour is orange. M16 is depicted as the oldest out of all the AR team members, with her deeper and more mature voice, the way she looks out for her younger sisters, and the way she acts.

As a core character, a certain degree of lore and character settings were put into her designs, which the artist shared in the official artbook of Girls' Frontline:

A siscon. In light of the period when the original design was completed and saw use, I found suitably down-to-earth (or perhaps drab) elements and put them together.

M16A1's clothes are more sensible compared to the other team members. Even her coat would just be a raincoat if she put it on properly. During the design phase, I decided on making her a mature, straightforward big sister type. She's the one who keeps the team together and no matter how much pain she goes through (or will go through), she needs to let the others see the happy side of her. That's probably why so many dolls regard her as an emotional safe harbor for them.

She deliberately left her facial scar and eyepatch unfixed, in order to remind herself of the past and to keep herself alert. On that note, I've been meaning to draw prequel art of her when I find the time. This also means that only the M16A1 of this story has those scars. Other M16s' eyes should be fine.

As for what's in the box, it contains several accessories she can choose from.[1]

Despite holding the standard Vietnam-era M16A1 in her CG art, her chibi sprite's M16 appears more like a modern AR-15 based carbines with the different parts, such as the 2nd/3rd generation collapsible stock of early AR-15 carbines, the upper receiver of an M16A1 (as noted by the lack of a brass deflector), the lower receiver of the XM16E1 prototype (as noted by the lack of fencing around the magazine release), the circular handguard of the CAR15, and the 14.5 inch barrel of the M4A1 rather than the 20 inch barrel of standard M16s. This is likely a mistake.

Alternate gallery consisting of artworks with slight alterations as well as miscellaneous artworks.