Heavy Ordnance Corps (HOC for short) is the name of the heavily equipped units in game. First released on CN before 2018 summer event Continuum Turbulence they made a big change in gameplay. EN/JP followed roughly the same release order (January 2020 before Continuum Turbulence).

HOC units are handled different than normal T-Dolls. There can only be one instance of each HOC unit, so they are rather unlocked than gained. To unlock a HOC unit, five Central Data need to be prepared. Further Central Data will be needed to promote the HOC unit. Once unlocked there is no way to lose them as there is no mechanic to release or scrap them.

They do not have equipment, but can be strengthened with Chips.

HOC units appear as normal units on the battlefield. For a proper introduction on how to handle them, please see In battle. The HOC feature introduces two new buildings to the Headquarters: The Intelligence Center and the Garage.

Accessing the new rooms as seen in the in-game tutorial

All interactions with the new HOC feature are within the new buildings/rooms. They will be unlocked with beating chapter 8 stage 5.

The newly available room can be accessed by either of the following ways:

Intelligence Center (all facilities on Level 1)

The Intelligence Center is the main place to gain Central Data and Chips for the HOC units.

Pure Samples can be harvested here. The samples will remain at the Data Receiver until one collects it and will continue to gather over time until it reaches a certain cap. This cap can be raised by upgrading this facility.

The Intelligence Quests as seen in the in-game tutorial

Provides quests rewarding Samples. The Intelligence Quests will offer new quests each day. Existing quest progress will be lost with the change of the day.

Depending on the upgrade level of the facility, up to 3 (three) quests are provided.

This article may require cleanup, for the following reason(s): If there is a fixed list of quests, please add a table with all quests here.

Pure Samples can be storaged. Upgrading this facility will increase the amount of Samples storable.

At the beginning, only two research tasks can be queued at once 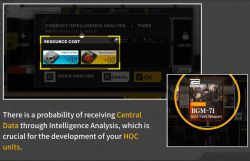 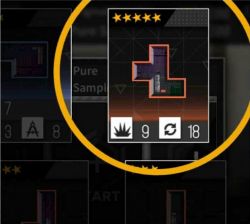 Chips can be said to be the equipment of HOC units

The general rules of processing are as follows:

When enough Central Data for a HOC unit's promotion or unlocking is collected, it can be applied by tapping the corresponding icon on the bottom. Depending on the currently activated tab at the bottom a switch to "all" might be necessary.

The garage as seen in the in-game-tutorial

The Storage holds onto all Chips collected. Upgrading the Storage increases the amount of Chips storable. It has no further function.

The facility's level determines the amount of Chips which can be stored. 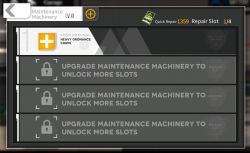 The facility's menu as seen in-game

The repair station for damaged HOC units. HOC units can be repaired by opening the facility's menu and choosing the HOC unit which shall be repaired.

When there are damaged HOC units, the T-Doll repair menu will show an additional button to start the repair of the HOC unit, too.

Each facility level adds another slot up to a max. level of three (=four slots).

The Training Range facility as seen in the in-game tutorial

Both experience and skill training are accessible over the HOC unit, too

Screenshot of the experience training menu

The unit's dashboard leads to the Training Range, too

The Training Range is used for both experience and skill training of HOC units. Units in training are not available for use in missions.

Upgrading this facility will increase the amount of units able to be trained in parallel. It will also affect the amount of

For each slot in the facility one HOC unit is selected. For each HOC unit the type of training has to be selected (Experience or Skill Training).

Once a training has been ordered, it cannot be cancelled. To complete either immediately, a single

Quick Training Contract will be used.

For Experience Training, both

Special Combat Reports are needed. The amount consumed depends on the upgrade level of the facility and the hours of training set with the slider. You will always need at least 5

per hour, regardless of the level of the Training Facility; therefore, it is recommended to wait until Level 10 for the best results (15

For Skill Training, both

batteries and the three different tiers of

data are needed. The time needed for training depends on the skill level. The first skill of each HOC, however, is special: it requires double the amount of data and slightly different amount of time (generally double as well).

The UI for refactoring Central Data

Facility used for refactoring Central Data of HOC units to

WAVE Data Patches. WAVE Data Patches are used to further boost a HOC's rarity and increase their stats beyond maximum. Central Data to be refactored needs to be dragged over to the right field. The choice will be confirmed with "OK".

Only BGM-71 unlocked in this case

Clicking on the Elevator in the Garage will lead to separate rooms in the basement. Each rooms ID will be noted on the top left of the screen. This place is another overview of the HOC units.

Description of stat enhancement as seen in the in-game tutorial

Similar to stat enhancement of T-Dolls, HOC units can raise their stats by consuming

In contrast to T-Dolls, HOC units' stats need to be upgraded each for its own.

Not all stats do not increase with a 1:1 rate: 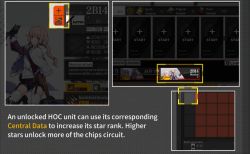 A HOC unit's iteration (star rank) can be upgraded up to five yellow stars with Central Data by promoting it. Further upgrades are possible once the unit reaches level 100. Upgrades beyond five yellow stars require

How to install Chips as described in the in-game tutorial 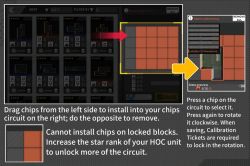 Installing chips as described in the in-game tutorial

Same colour bonus as described in the in-game tutorial

The Chips attached to a HOC unit can be set up here. Chips can be placed by dragging them from the storage (left) to the Chip Matrix of the HOC unit (right). Tapping on a placed Chip rotates it. Each rotated Chip consumes

Calibration Tickets when confirmed. The amount of tickets used will vary based on the rotated chips rarity;

The numbers displayed are "Chip stat sum" and "Max allowed stat". The coloured number next to them is the "Same colour bonus".

Placing Chips of the same colour provides a stat bonus. Tap the information icon to see the possible and achieved bonuses.

The Chip system is a classic Pentomino puzzle system[1]. Place and rotate Chips to fill the matrix of your HOC unit.

The list of available Chips is accessible through the Garage

Unneeded Chips can be scrapped

So called Chips (Tetris like stones) are used as "equipment" for the HOC units. The number of Chips which can be collected are defined by the Storage. Despite the colour, there is no difference between blue and orange coloured Chips.

Chips can be enhanced similar to how equipment enhancement works. To enhance a Chip, other Chips and resources will be consumed. After choosing the Chip for enhancement, the Chips for consumption need to be selected.

Using Chips of the same colour and/or higher rarity will give more "experience" for the Chip. Each upgrade will result in higher stats of the Chip.

Unneeded Chips can be scrapped. Each scrapped Chip will grant a small amount of resources.

A common rule of thumb defines that Chips should only be scrapped if the storage is full and the existing (and installed) six- or five-star Chips are already enhanced to their maximum level.

For a list of released HOC units, please see the corresponding Index