One purchase available per player

One purchase available per day 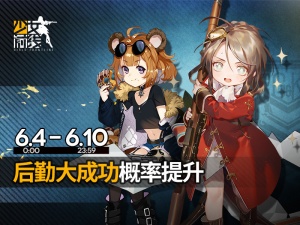 Logistic great success rate for all logistical missions will be increased while the event duration lasts.

Procurement pool "Fairy tale Festival" will be open from 9th of June 00:00 til 21st of June before maintenance.

Costume available as part of a bundle:

One purchase available per player

Defeat bosses from chapter 1 to chapter 8 normal players will be awarded with 10 event currency "Alloy Zongzi"! Zongzi eligibility reset on 00:00 Beijing time everyday, maximum amount of Zongzi can be obtained per day is 80!

Event shop is located in the in-game micro-transaction shop, top tab. Items for purchase and pricing as following:

Note that chapter 8-6 have two bosses, while only 10 Zongzi can be obtained per day，player's daily Zongzi eligibility will be consumed after defeating just one boss, players could consider:

Return! The Glory of Grifon[edit]