Technical Fairies (also called simply Fairies) are support units that assist an Echelon during combat, seen as UAVs hovering above the team. They are acquired from Heavy Equipment Production. The official art of almost every fairy used in the game are all drawn by Saru, the same illustrator who produced T-dolls such as SMG MP5 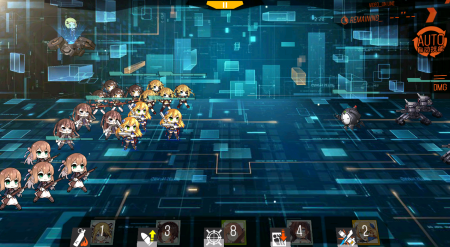 Faries serve as the 6th man of the team, providing all sorts of combat buffs or support. Each usage of their skill consumes a "Support Order". Support Orders are seen on the map, are shared across all missions and gradually regenerate overtime. Skills can be increased in level through training. They also have a 2nd ability known as a "Talent" which is a team-wide buff that triggers randomly. Talents can be changed through Fairy Calibration.

Each fairy also has its own set of stat boost that benefits the entire squad. Fairies can also level-up during combat and be enhanced with other fairies just like normal T-dolls.

Skill training, Fairy Enhancement, and Fairy Calibration can all be found in the Research Menu

Fairies obtainable by other means