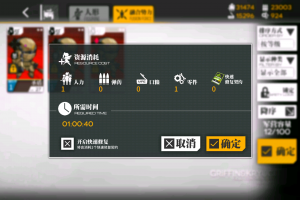 Out of date screenshot. Units no longer have a minimum repair time of 1hour.