Difference between revisions of "Jefuty" 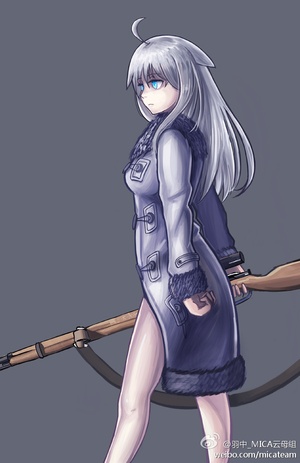 Jefuty[1] (洁芙缇) is one of the three test subjects produced during the Three Goddesses project in 2078, along with Lunasia and Noel. She is also a protagonist in Codename: Bakery Girl.

Jefuty was born in 2078 as a subject of the Three Goddesses project. Her DNA is a mix of human and GAVIRUL genes, and a reproduction of test subject Rose from the earlier Black Lily and White Rose project. Jefuty was the only test subject to ever be delivered through natural means.

When the Three Goddesses project fell through due to political tensions in 2085, Jefuty was lost in the confusion. Noel was in the hands of the Union of Rossartrism Nations Coalition and Lunasia was under Antarctic Union control, but they both fell shorts of initial expectations when they failed to activate relics sites. Both factions went to search for Jefuty, hoping the unique circumstances of her birth would have gave her new capabilities.[2] During the First Antarctic War, finding Jefuty became of utmost strategic importance for the Coalition in order to bridge their technological gap with the Union.[3]

The search for Jefuty ended in 2092, when she was found in the Caucasus by the Coalition. The Union intercepted messages about the find and deployed their own forces.[4] The Coalition had deployed a brainwashed Noel under the alias Lige to passively track Jefuty's movements.[5] Jefuty sensed Lige was another test subject and took her as her little sister. They both promised to find their mother.[6] On December 18th, 2092, two teams of the Union's Main Intelligence Directorate approached the refugees convoy Jefuty was hiding in to capture her as part of operation Bakery, but Coalition troops attacked, killing all MID agents and civilians in order to capture Jefuty. Jefuty and Lige tried to run away, but they were confronted by a tank who killed Lige gruesomely with his machine gun and main cannon. As she was running away, Jefuty witnessed two men approaching Lige's mangled body as it reassembled itself, and one of the men gave her a drug to accelerate her recovery.[5]

Jefuty found the MID agent Mendo knocked out by an explosion and dragged him with her into the woods, tending to his wounds.[7] Her plan was for the fight between factions to continue and generate as much chaos as possible so she could disappear more easily,[8] and she helped him reach his support outpost. Mendo having lost most memories of the mission, he didn't yet realize that Jefuty was his objective, nor did the TASA agents who had not been informed of the objective of the mission.

In the night of 18th to 19th December, Jefuty revealed to Mendo that she knew the location of the Coalition officer who had staged the attack, Major Beria, and both set off without informing the TASA agents to take their revenge.[9] While running reconnaissance, Jefuty spotted Beria speaking with the other man she had seen in the wood and Lige herself, who uncovered her position and forced Jefuty and Mendo to run away into a nearby infection zone inhabited by ELIDs.[10] There, they were helped by Lige, who informed them that soldiers were leaving the base open to an attack before leaving.[11]

Joining forces with other MID survivors, Mendo and Jefuty infiltrated the base but fell into an ambush set by Beria. Jefuty asked Beria what had happened to Lige,[12] and he revealed how she was used to track her down and her true name. The MID troops managed to break the encirclement with a diversion, but they were stopped by Noel, who resented Jefuty for abandoning her and carried out a plan to bring Jefuty back to their father. Jefuty refused and fought Noel to leave the base, but a Coalition army was closing in to capture her and their TASA extraction ship would take 30 minutes to reach them.[6]

The group hid in an old church to fend off Beria's troops while waiting. Before the battle broke off, Mendo told Jefuty he had realized she was his objective from the start, but expressed that he was happy to bond with her during the last two days, though she did not smile once. The Union soldiers and Jefuty managed to defend against Beria's troops and Assault Artillery platforms, and when the enemy troops ran thin, Mendo and Jefuty went after Beria himself.

In the bad ending of the game, Beria taunts Jefuty, saying she will never see her sister again before dying. Mendo tells Jefuty this is a trap, but she shoots him in the leg so he won't try to stop her as she leaves, letting the Antarctican forces recover him. In the normal ending of the game, Beria reveals Jefuty's reasons to keep Mendo alive and laments that she is responsible for many deaths in the war. Mendo then asks Jefuty to tell the truth about her origins. Jefuty explains she was a subject from the Three Goddesses project, and that she felt responsible for the death of the people who died so the factions in the war could capture her, even though she never had a choice in the matter. She asks Mendo to kill her and stop the violence she's causing, but Mendo refuses, trusting her to live her life as she intends. Jefuty smiles and disappear in the mountain woods. The true ending plays like the normal ending, but Jefuty kisses Mendo before running off.[8]

In 2094, the Union located Jefuty in the Bear's Den relics site and staged operation Kindle, a full-on assault designed to seize Jefuty back. The operation fell through again when the local Coalition commander ordered the use of Assault Artillery systems within the relics site, starting an event similar to the one that had led to the First Beilan Island Incident. Union and Coalition high commands collaborated and the Coalition authorized the Union air force to deploy a missile containing a molten plutonium payload to utterly destroy the Bear's Den. Both Jefuty and Noel were declared MIA.[13]