Assigning T-Dolls and Fairy to Echelon 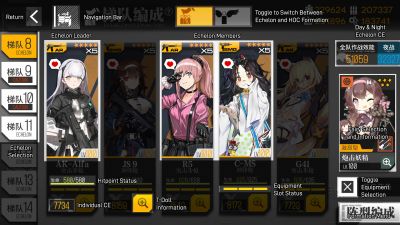 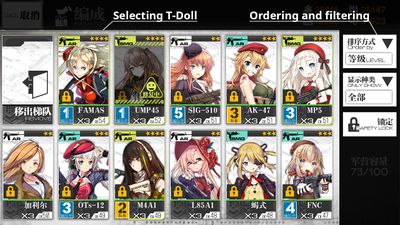 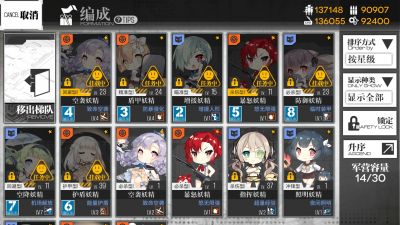 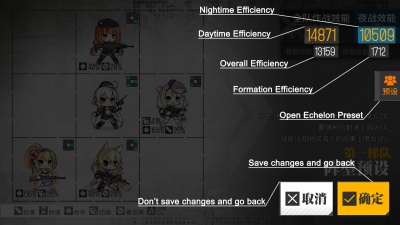 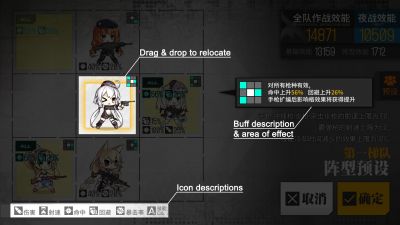 From here, Commanders may see the formation of the selected echelon, together with some additional information.

Generally, each type of T-Dolls will provide buffs to T-Dolls of different types.

The T-Dolls will enter combat from the left side of the screen. Therefore, the T-Dolls in the far right column are the frontline, meaning that they WILL almost certainly take damage. T-Dolls in the middle row generally will be targeted by enemies first, and thus will take the most damage.

If you have T-Dolls with multiple dummy-links, it will not only increase the versatility and survivability of the T-Doll itself, but the buff rate of it's T-Dolls also improved.

The aura effect icons displayed in the formation menu represent, from left to right: 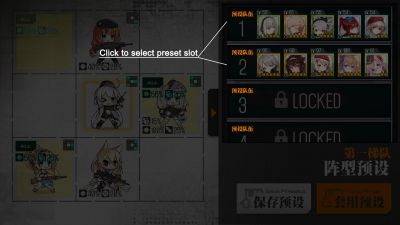 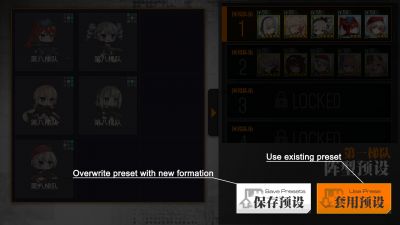 Echelon Presets allow players to "save" echelons (including the members and their positions) and "load" them when needed. This feature can be accessed by tapping the "Presets" tab on the right of the screen. Further instructions can be found in the following images. 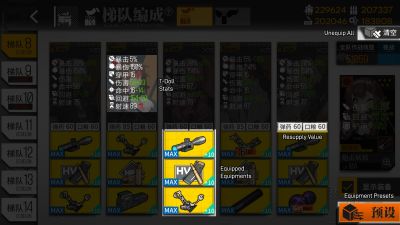 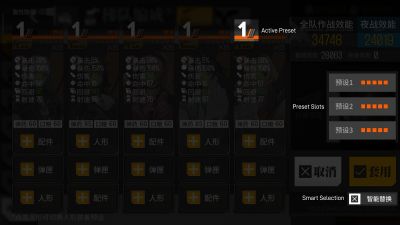 This article contains spoilers. You have been warned. Click here to skip this part.

As of January 2020, players starting in Official CN server gained access to commanding Sangvis Ferri echelons. SF Coalition echelons are a different experience from conventional, total unit limits is increased from 5 (five) to 9 (nine), the total unit limit is likely due to tile limits, as player owned echelons can only have nine slots. Tile buff auras found on conventional T-Dolls are no longer present, additional equipment is no longer necessary and technical fairies are now simply incompatible. Coalition echelons can be deployed normally on the map without a special helipad, alongside normal echelons. They can also receive bonus from strategic type technical fairies, as well as HOC out-of-combat supports. On the subject of 'How to obtain Sangvis Ferri units', see main topic here.

Commanders can assign any Coalition units that are already captured into combat echelons, to assign them to combat echelon, go to the formation menu, tap the empty position or already assigned doll, select the sub-categories on top of the menu to Coalition on the doll selection screen, and finalise selection. Upon selecting any coalition units, a dialogue box will prompt asking for confirmation to switch echelon type. To switch back to the conventional echelon type, simply reverse the process by selecting any T-Doll, and confirm on the message prompted.

Coalition Echelon of Sangvis Ferri design consist of one leader and up to eight members, Commanders must select a leader first before assigning members of the echelon, note that Ringleader type units cannot be assigned as team members. Coalition echelons also has an unit limit known as 'Cost', each unit has their own cost, the higher the base rarity is, the higher the cost though there are some exceptions. Cost limit restricts Commanders from mindlessly stuffing powerful units into one echelon. 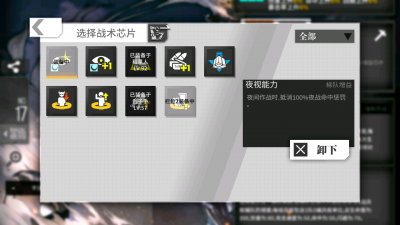 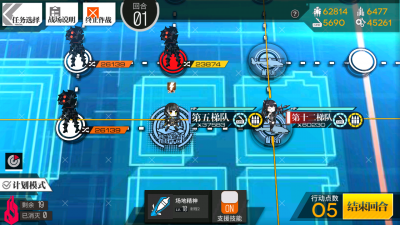 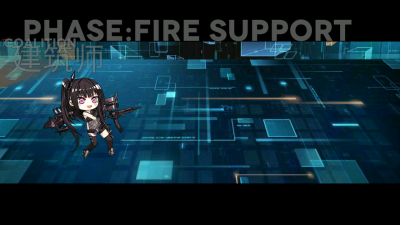 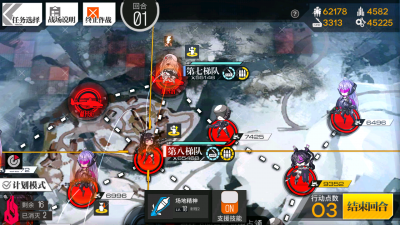 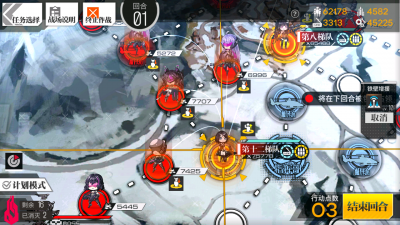 Ringleader units, as story suggests, are field commanders for lesser SF units further down the chain of command, not only they are very capable of combat, they also act as force multipliers for other SF units present.

Commanding an SF echelon is not so dissimilar to conventional echelons, with a few exceptions. Coalition echelons always deploy carrying 0 ammo 0 ration, they can be moved just like conventional echelons, and capable of engaging enemies, capturing nodes, destroying map infrastructures and rescuing hostages. Some other points of interest listed below:

Players will notice distinct UI differences when entering combat sessions with an Coalition SF echelon, this is known as the Assault, Eliminate and Guard order. All combat session deploys with the echelon under 'Guard' stance. Entering battle, assimilation echelons will engage enemies much like regular T-Dolls, assuming units are occupying the rightmost tiles, ranged units will have max range and will target anything within range.

Units moved away to engage enemies at melee range will still be 'tethered' to their tiles, but however they will not response to change position/swapping managements when they are not under 'Guard' order. The only real command a player can give to melee units is either move-to-engage, or return-to-position. While melee units are on the move all AoE attacks aimed at them will be aimed at their model's spot, lacking the precise control, the only way to micro-manage them away from the attack is to give the guard order. 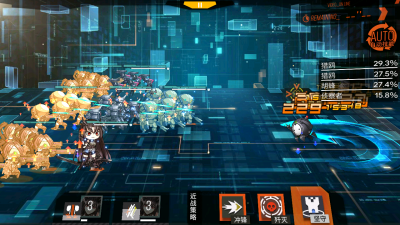 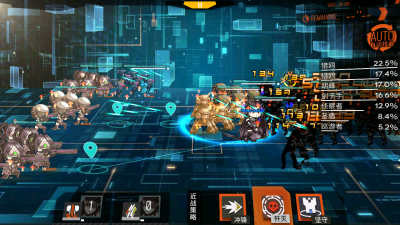 Eliminate is the middle command, this will send all melee units to attack their closest enemy, range units will still attack as normal. 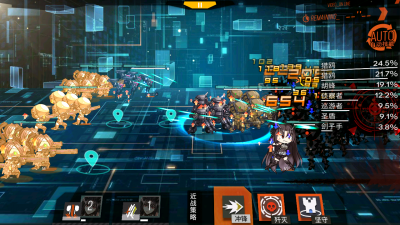 Melee units performing a frontal assault on the enemy

Melee units will only stay in their lane of the formation, and during the assault order, they will ignore all enemies that they do not make contact with, unless another order is given.

Below are lists of popular formations recommended for new players. Keep in mind this section will only guide on the general formation building and you must make best of dolls you have to build the best echelon you can.

We'll be using keypad location to refer to each positions.

The roles in each cell will be in order from highest priority to lowest priority roles of the spots. 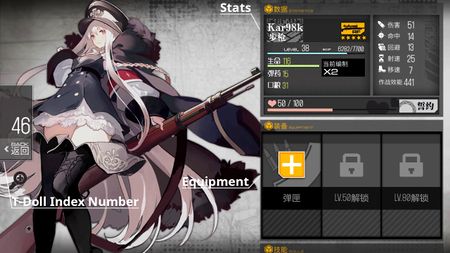 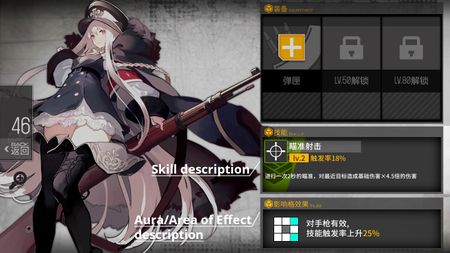 Access by tapping the yellow button with the "+" inside the magnifying glass located at the lower right corner of T-Doll card. From here, player can view all of their statistics, skills and Buff Tiles.

In the left column, from top to bottom and from left to right, these are:

In the right column, from top to bottom:

Affection: At the bottom of the table is the Affection meter of the T-Doll.

Once players obtain a T-Doll, the Affection will always be at 50/100. The meter will go up gradually when you use that T-Doll in Combat. Additionally, Echelon Leader and T-Dolls who get MVP in combat will earn more Affection. On the other hand, the Affection can also goes down when a T-Doll lose all of her Health in combat and when the enemy get through to the farthest left screen. Once this happens, not only the dying T-Doll but all the T-Dolls in the Echelon will drop their Affections, so be careful!!!

Affection buffs: When the Affection meter reaches 90, the T-Doll will receive a +5% boost to her Damage, Accuracy and Evasion stats.

Marriage: When a T-Doll's Affection reaches 100, a small heart symbol will appear on her card. And you can choose to marry her (Click the Button with the ring symbol at the right side of the Affection meter). A married T-Doll will have a ring symbol on her card, and her Max affection will increase to 150, upon reaching 140+, that T-doll will receive an additional +5% boost for Damage, Accuracy and Evasion (stack with the previous buffs to +10% boost).

This part is about the T-Doll primary skill and its detailed descriptions.

Description of the T-Doll's Effect Tiles. Also, the tile shows the direction of buff bonus for T-Dolls.