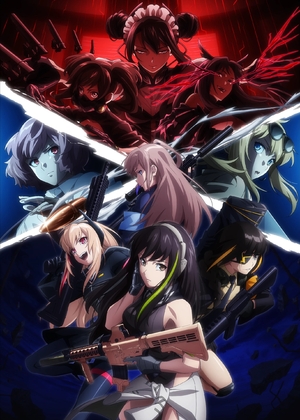 Girls' Frontline (ドールズフロントライン) is a 12-episodes animated series based on the mobile game Girls' Frontline by Sunborn. It was originally announced for 2021 during Sunborn's 22 January 2021 live stream and will be animated by Asahi Production, with production by Warner Bros. Japan.[1] Key arts have been illustrated by duoyuanjun. The opening is Bad Candy by yukaDD(;´∀｀)[2] and the ending HORIZON by Team Shachi.[3] Broadcast started on 7 January 2022 in Japan on BS11, Tokyo MX and AbemaTV and outside Japan on Muse Asia, Funimation and Wakanim.