It will be a roguelike strategy game where the player, as the head of Project Neural Cloud, must lead a group of Dolls called the Exiled and save them from an unknown hostile force in a digital world. Each Doll has their own abilities, upgrade them and build their base. It stars Persica as a member of 42LAB. 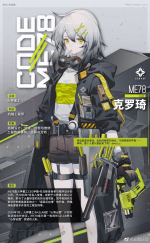 "The rhythm of the transmission, the intricate fit between gears, the regular cycles of the gas valves... ahhhh, it makes me sooooo excited (in all sorts of ways)!"

The CEO of Svarog Heavy Industries Elon Thomas personally took part and created the engineering design for ME78. She entered service in July 2056 and was employed in Svarog Heavy Industries' core engineering division, taking part in many cutting-edge research and development programs, including improvements to a new energy source designed by Thomas, the "Noah Reactor", engineering support for Collapse Fluid energy generation technology R&D, and so on. "You see this ferret? It's name is Sako, and no matter how dangerous the mission, it's my best...and only partner. Hehe-"

S-WG is a special-forces Doll developed by Svarog Heavy Industries. She was released with a sniper crossbow, cutting-edge optics, optical camouflage and many other pieces of advanced equipment, which makes her extremely suited for launching sniper attacks while concealed in the environment, assassinating VIPs and gathering information. She once served in the EU Defense Army's ground forces and carried out many assassinations, and never failed a single mission...except for the last one.

After retiring from the army, S-WG was sent to 42Lab as a test subject to take part in "Project Neural Cloud". 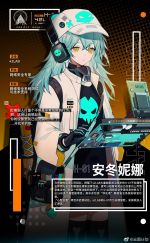 "Staring at people and sizing them up is very dangerous. Ah, that reminds me, I've already rooted your devices...just kidding."

In contrast to traditional Autonomous Dolls, H-01 - who is equipped with plenty cutting-edge technology from 42Lab - not only possesses some of the world's best data processing and computational abilities, but she can also briefly upload her consciousness into various devices. With the help of this special ability, H-01 has taken part in many top-secret 42Lab projects as a network security specialist, including the development project for the "Sanctifier" network security system.

After "Project Neural Cloud" began testing, 42Lab arranged for H-01 to join it as a key security element. 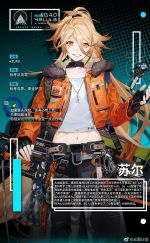 "If you're going on an adventure, please take me along! As long as big sis is around you will NEVER be hurt, not even a little!"

After the end of the War, scientific exploration of Relic Sites became the focus of the scientific world's attention once more. The EG 4.0 model Expedition Guardian Doll was developed to address this niche.

The EG 4.0 is furnished with military-grade close-combat weaponry, such as the high-energy taser blade Árvakr and the transformable high-frequency blade Alsviðr, which pushes her close combat performance to that of military Dolls and fully demonstrates the technological skills of 42Lab. Compared to the preceding three generations of EG Dolls, the EG 4.0 has met with widespread approval from expedition teams due to its reliable performance and its warmth and closeness, the latter of which is rarely seen in ordinary Dolls. As one of 42Lab's internal Doll, EG 4.0 has been entered into the first batch of "Project Neural Cloud" participants. "Working for long hours eventually leads to fatigue, so please make sure to balance your work with leisure. Would you like me to make you a cup of coffee to soothe your frustration?"

"Persicaria" is a custom-made research assistant Doll built by 42Lab for the renowned AI researcher, Persica. Her appearance, body type, thought processes and so on are very similar to Professor Persica. Compared to the other 42Lab research Dolls, "Persicaria's" processing abilities and hardware are at the pinnacle of the industry standard. She also has extremely high compatibility with the field of AI technology, with excellent deep learning abilities. Re: Concerning the development invitations to Project Neural Cloud

My apologies for replying so late to your email. I've been considering your proposal over the past two weeks, and my answer is "Yes".

I read the planning document you sent about the key period, and like I said earlier, "Project Neural Cloud" will become an amazing field of technology, but it is difficult to avoid encountering technical problems in the process of realizing it. The solutions you proposed are also very innovative, and on that note, I believe my assistant will be able to help you.

You should know her, right? After all, her name is Persica, and she's identical to me in body type and looks. Also she was born in the labs of 42Lab (permit me to thank you for this once again), so forgetting her will be very difficult. She's a specialized model designed to focus on AI research, and before development began I insisted on maximum computing power for her neural cloud. Therefore I believe her abilities will prove to be very important in the development of "Project Neural Cloud".

In addition, I know the project supervisor of whom you speak. This professor has an excellent reputation in the academic world and I deeply respect the work they've done in the field of AI. I spoke with Persica and she would be very happy to work under this professor for a while, and she has expressed a desire to perform live testing after the development period ends. Our research here has recently been stuck in limbo due to certain practical reasons, and if changing environments will let her continue to grow, then I see no reason not to entertain a good idea. However, you must ensure her safety.

Now then, please go through the official flowchart again. Over the next few days, I'll be going to 42Lab with her to sign the appropriate documents.

I wish the project success, for everyone's sake.﻿