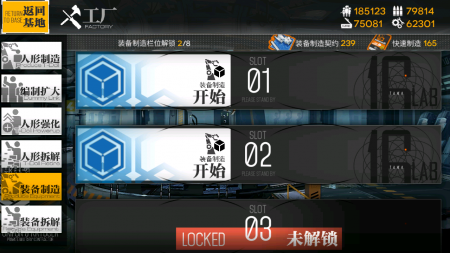 Official Equipment Recipes which can be viewed in game.

Below are recipes which meet the minimal resource requirement for said 5-Star equipment to appear in the basic production pool, note that these recipes will not guarantee a 5-Star piece of equipment on your first attempt and may require multiple attempts for a chance of success.

Additional fairy information can be found at Technical Fairies.

Much like how LSC/HP is the primary way of obtaining SG T-doll's, HEC (Heavy Equipment Construction) will be the primary way of obtaining T-Fairies. While most of the Fairies can be obtained from the base recipe, some Fairies require much more for them to have a chance of dropping. Note that these recipes DO NOT GUARANTEE the Fairy and you still only have a general 27% chance of building a fairy from HEC. Recipes are as follows:

Special equipment which are primarily obtained through events or as rewards, although 16LAB equipment may seem special, they're nothing more then just max calibrated 5-Star equipment or their respective types.

According to an official statement[1] the construction rates are as follows.

These are average chances, with different resources spent. Occurrence chances of different star levels may vary[2].